The Corvus Consort is a vocal ensemble based in the UK.

Founded and directed by Freddie Crowley, the group draws its members from a pool of young professionals in the early stages of their singing careers.

With key objectives of musical versatility and innovative programming, the Consort performs in a wide variety of genres and styles, stretching from the Renaissance to the present day, and enjoys a range of instrumental collaborations. The ensemble is also flexible in size and forces, so it can be carefully tailored to each particular performance context.

Ongoing collaborations include a project reimagining Baroque choral works with the Ferio Saxophone Quartet, a programme of music for upper voices and harp with harpist Louise Thomson, and an improvisatory exploration of Renaissance soundworlds with Music on the Edge.

For Christmas 2020, the Corvus Consort commissioned twelve of the UK’s most exciting young composers to write miniature works for a choir of twelve voices based on the well-known song The Twelve Days of Christmas, as part of a festive project entitled “Twelve Composers Composing”. The resulting works were premiered in twelve short videos released online throughout the Twelve Days of Christmas, and the Consort looks forward to giving their live performance premieres in December 2021.

Since making its first appearance in Devon in September 2018, the Consort has enjoyed performances at the Kings Lynn Festival, Borough Theatre Abergavenny and Merton College Chapel in Oxford, as well as several more concerts across the Westcountry. Future engagements include Winchfield Festival with the Ferio Saxophone Quartet, Simonsbath Festival with Music on the Edge, a Christmas concert for the Lamberhurst Music Society, and planned performances at Buckfast Abbey and Clifton Cathedral.

Hear the Corvus Consort in... 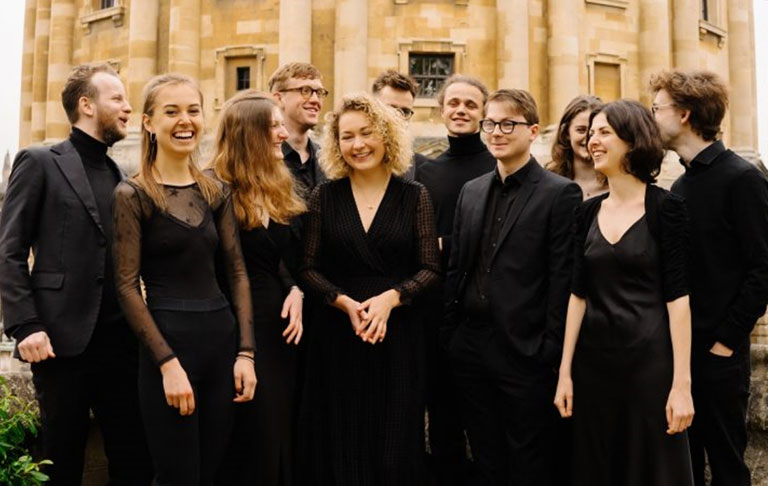